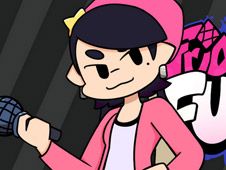 Welcome back to all of you into our category of FNF Games, a category that is getting really better today as well, when our administrative team wants to share with everyone here the awesome new game called Friday Night Funkin: Splatoon Mod, where you will go up against a character named Callie, with her cousin Marie watching the show happen. This is a full week mod with three custom songs:

Show Callie from Splatoon who's the boss of music!

When you see the arrow symbols above BF match with one another, it is at that moment that you also have to press the arrow keys on the keyboard, doing it at the same time, and if you keep doing so until the song ends, you will have hit all the notes and won the game.

You can lose after you miss to press too many keys one after another, so be very careful how you go about things and don't allow that to happen for anything in the world. Enjoy!