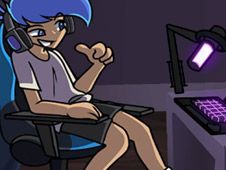 What is FNF: Amor vs Sans in X Spilt Remix?

Armor from the FNF Bob and Bosip mod is now sitting on his computer, his gaming one, and on the other side is Sans from Undertale, the character for which you are playing, and you now need to help him win the musical battle on a brand new song called X Spilt Remix, which there is no doubt in our minds you will love from start to finish!

Armor Vs Sans, the hottest rhythm battle of the moment!

Well, when you see the arrow symbols above your character matching with one another, make sure to use the arrow keys to press the very same ones as well, and do it at the right moment, and if you keep on doing so until the end of the song, you are going to win.

Be careful not to miss pressing too many keys consecutively, because you will lose and have to start all over again from scratch. Good luck, and make sure to stick around, since this day will continue to be filled with one awesome game after another!