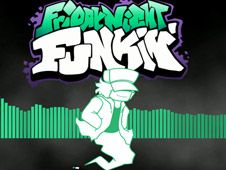 What is FNF Smoke Em Out Struggle [Release Remix]?

Garcello, without a doubt one of the most popular FNF characters so far, is back, back like he never left, as right now on our website you all get to have lots and lots of fun with this brand new awesome game called FNF Smoke Em Out Struggle [Release Remix], where you are battling him in a remix version of Release, certainly one of his most popular tracks!

Get in the groove and master the remix of Garcello's Release!

Well, for those of you who are not used to playing games in this category, we will now provide you with an update on how the game works, so that you can give it your best. When you see the arrow symbols above BF match with one another, it is at that time that you also have to press the arrow keys, the same ones.

Do that until the song is done with, and you become the winner, but be very careful not to miss too many of the notes one after another, since then you lose and will be forced to retry. Good luck, and enjoy!