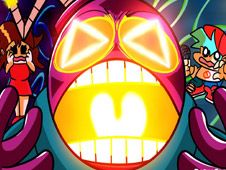 Whitty is one of those recurring characters from the FNF Games series we can't get enough of, never, which is why we are delighted that right at this moment we get to share with you a brand new game featuring him in, a game that has lots of fun new music and remixes of his original songs in them, a game called FNF Whitty Ballistic Retro Specter Remix!

Learn how to defeat Whitty in a rhythm battle, once again!

There is only one difficulty level to this game, and that is really hard, and the remix of Ballistic is going to have quite the challenging chart, so if you defeat this version of the bomb-headed man, you will reach legendary status in the world of FNF Games!

When you see the arrow keys match above BF's head, press the same one on your keyboard, and getting the key and timing right all the way to the end of the song will help you win the game.

Be careful not to miss too many notes in a row, because if that happens, you lose and have to start the game all over again, and we're sure you would not want that, right?