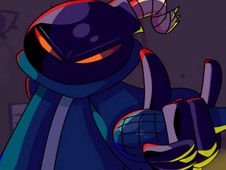 What is FNF vs Whitty Returned Remix?

Whitty Returned in a brand new FNF Remix right now, where we invite you to once again defeat this beloved character with a bomb instead of a normal head, who you will challenge on these two songs:

Whitty Returned, but can he remain? Beat him on the remix mod!

Whether playing in the story mode or free play mode, to win you need to reach the end of the songs by playing all of their notes according to the charts, something that you do by pressing arrow keys at the same time as the identical arrow symbols float and match above BF.

If you miss hitting those notes too many times in a row, you lose and have to start again from scratch, so focus not to let it happen. Good luck, enjoy!