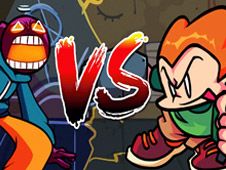 What is Whitty Vs. Pico Remix Demolition?

It is usually Boyfriend that faces off against original characters from various mods, but today's protagonist role goes towards Pico, an orange-haired assassin, who is going to duel against Whitty, an angry man whose head is a bomb, and they are going to battle it out on the Demolition Remix, and if you thought the original track went hard, just wait until you see how this one goes!

Learn how to play FNF right now and here:

Well, you are going to see arrow symbols float all around Pico, and when they match with the same arrow symbols above his head, that is when you have to press the same arrow key on your keyboard, and you need to do it at that time, not faster or later because if you do, you miss the note, and missing too many notes in a row means losing the game.

Do you think you're up to the task of becoming Pico and defeating Whitty? Then start this mod right now, and make sure to tell your friends about our awesome games with Friday Night Funkin' too, since only here they can find the best of them!