FNF vs Whitty with Lyrics 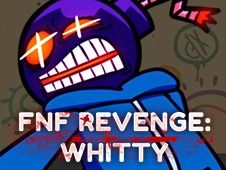 What is FNF Revenge Whitty?

On the right side, on the button that symbolizes a shopping cart, you can select which weapon you want to kill Whitty, and here you will have the following tools: sharp pencil, pawns, radioactive syringe, ninja weapons, serrated wheel, spear, bomb, explosive, TNT, fuel barrel, rocket, pistol, rifle, machine gun, sniper or automatic weapon. Each hit you apply to Whitty will give you points that you can use in the marketplace to improve your weapons.

Who is Whitty from FNF?

The character Whitty is one of the most popular characters from FNF, he appeared among the first characters in this game, and his abilities as a dancer are recognized by all players. Whitty is a character that you will have to work hard enough to defeat in a battle with rap rhythms. His physical appearance is quite casual, with a hooded blouse on him, a pair of orange pants, and instead of a head, he has a bomb that explodes every minute.

Use the mouse to kill Whitty.