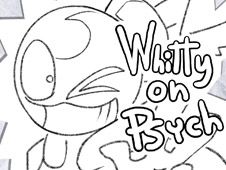 What is FNF vs Unexpected Whitty Psych Port?

The FNF vs Unexpected Whitty Psych Port features a brand new song for you to battle against this bomb-head man, called 'Dull Fuse', which we are sure you will appreciate just like you always do with him!

When the floating arrow symbols match above BF's head, that is when you press the identical arrow keys to hit your notes, and if you keep doing it until the song concludes, you win but know that missing to hit your notes multiple times in a row, you lose and have to start again from scratch.