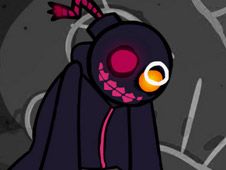 What is FNF vs Whitty Corruption The Chase?

Whitty, an already-angry antagonist from FNF has now been made even angrier because the corruption virus has taken over his body, and he is now a dark and mad version of himself, and the only Boyfriend can snap him out of it and bring him back to his senses, if Boyfriend defeats him in a musical battle, something that you do on the following brand new custom songs:

Can Boyfriend defeat Corruption Whitty? With your help, YES!

Just like in the original Whitty Mod, the gameplay remains the same. Use the arrow keys to play the notes of the songs at the right time, and that means that when arrow symbols above BF's head are matching with one another, you need to press the same arrow key on your keyboard.

If you've reached the end of the song and the progress bar is more towards you, you've won, but be careful not to miss hitting too many notes in the song, because if that happens you lose and have to start all over again. Enjoy!