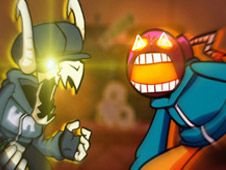 What is FNF: Tabi VS Whitty?

We have to be honest when we say that it is kind of refreshing to see Boyfriend out of the picture sometimes, and have other characters from FNF battle each other in a rhythm battle, even more so if we're talking about two antagonists, which is the case right now when we invite you all to play FNF: Tabi VS Whitty!

Tabi is the Ex-Boyfriend who has the head of a skeleton with horns, and Whitty is a man who has a short fuse because he has a bomb head. The two of them are battling out on the Genocide X Ballistic Remix, and you're about to have lots of fun joining them!

Tabi VS Whitty, who will win?

Considering that you will play as Whitty, we hope that you win, so be focused and skilled enough so that you reach the end of the song and turn the progress bar in your favor.

To do so, when the arrow symbols are matching with those above Whitty, press the arrow keys on your keyboard that match them so that you play the song according to the charts.

Be careful not to miss hitting too many notes of the songs in a row, or you lose. Good luck!