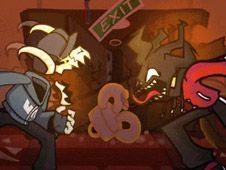 What is FNF: Tabi VS Agoti?

It seems that Tabi is out to get every other modded character from FNF, and after he just battled Whitty not too long ago, his newest target is Agoti, or A Guy on the Internet, who is going to take the role of protagonist you take control of in this game, and we hope that you give it your best to defeat Ex-Boyfriend on the song mashup called Genocide + A.G.O.T.I remix.

Just like in other FNF Games, do your best to reach the end of the song with the progress bar in your favor, because that means you have played the song according to its chart, and will have won.

When you see the arrow symbols that float match above Agoti, you press the same arrow keys to play the notes. Be careful not to miss too many of the notes in the songs, or you lose.