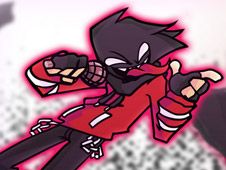 What is FNF: Agoti Sings Ugh?

Ugh is one of the most popular tracks to have ever appeared in the Friday Night Funkin Games series of our website, and this is because it is the iconic track of Tankman, the latest antagonist, but we won't be seeing him here today, since on his song we will have a battle between Boyfriend and Agoti, a battle that holds a lot of meaning since they are the BF and Ex-BF of the Girlfriend character in this franchise. Let's roll!

Can Agoti and BF sing Ugh to perfection? Let's find out!

When you see that arrow symbols above BF's head are matched to one another, you will have to press the same arrow keys on the keyboard yourself, and keep doing it until the song ends in order to win.

This also means that you need to be careful not to miss pressing the keys too many times in a row because if that happens, you will lose the whole game.

Good luck, and make sure to stick around, and catch all the awesome new games still to come here today!