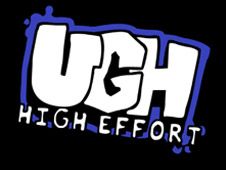 What is FNF UGH Pack?

Every morning you come over to Play-Games, you have the chance to find and play some of the best new FNF Games online on the internet, which is what is obviously going to happen once more today when our team is excited to share with everyone the game called FNF UGH Pack, which makes things a bit different from most other mods we bring here usually.

What makes FNF UGH Pack different from most other FNF mods?

Ugh, High Effort is one of the most popular FNF custom songs ever since the inception of the series, and it is usually associated with Tankman, and while in most games you have new characters with multiple songs for them, this game makes it different, in that you have one song you will play on, which is Ugh, but you will go against three characters on it.

You can play against Pufferfish, which is exactly what his name suggests, a fish from water that puffs his mouth a lot and it is very funny to see it like that, then you can go against Sky, the obsessed girl with blue hair that wants nothing more than to get rid of GF and be with Boyfriend herself, and then Selever, a half-demon servant to Sarvente from Mid-Fight Masses, who was also an April's Fools prank character.

How to play this new FNF mod with Ugh:

Boyfriend needs your help to defeat all three of these characters in a rhythm battle on the UGH custom song and to do so, you have to hit all the notes of the songs at the correct time, something that you do when you press the arrow keys at the correct time, so only do it when you see the same arrows matching. Missing too many notes in a row will cost you the game, so don't let it happen!