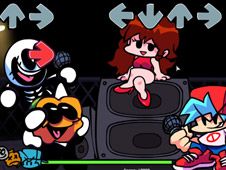 Mashups between characters from one FNF week, with music from another character's week, are always really interesting and a novel concept, and we love it that we can share one such experience with you all right now and here when you get to have tons of fun with FNF: Pump & Skid sings Garcello Week, where you go up against these two spooky kids on the songs from the Smoke’ Em Out Struggle mod!

Have a smokin' fun time with music and the two spooky kids!

No matter if you face the two characters in the story mode or the free play mode, the goal you have is the same, which is reaching the end of the songs by playing all their notes, and winning!

To do so, press arrow keys at the same time as arrow symbols above BF match one another, but be careful not to miss pressing the keys multiple times in a row, since that leads to your loss. Good luck!