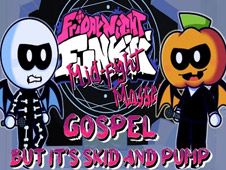 What is FNF: Gospel But It’s Skid vs Pump Cover?

Skid and Pump are usually a duo that works together to beat Boyfriend, but when it comes to the Gospel song from Mid-Fight Masses, they are competing against one another, with you also taking part in this musical battle, as you try your best to finish the song and win this mod, something we will teach you more about right now and here!

Sing Gospel ith Skid and Pump and have some holy fun!

When you see that arrow symbols above your character match one another, it is at that point you need to press the same arrow keys on your keyboard, something that you have to keep on doing until the end of the song to win when you will see the progress bar fully towards you.

Focus so that you don't press the wrong keys, or press the right key too early or too late, since that counts as a miss, and if you make too many misses in a row, you lose the whole game. Enjoy!