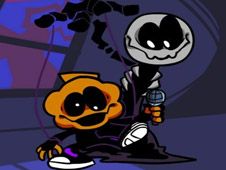 What is FNF: Skid and Pump Minus?

Today, unlike what you probably expected, we've got even more new FNF mods with Skid and Pump on our website, as we're now going to offer you the chance to have fun with a second game featuring these characters, a game called FNF: Skid and Pump Minus, where you will battle against the minus version of this character, or you can pick to become them or an imposter from Among Us and go against Boyfriend, so you've got plenty of customization!

Become Skid and Pump and show your rhythm!

If you go to Week 2 you can choose the playable character you want to be, out of the ones already mentioned, and you will try to battle Boyfriend and defeat him in a rhythm battle.

To do so, press arrow keys when they match with those above your characters, but remember that pressing them at the wrong times causes you to miss a note, and if you miss too many notes, you also lose the game.

A lot of fun is waiting for you one click away, so we hope that you start this game right now, and let the fun start as well!