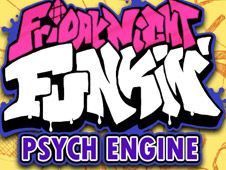 What is FNF on Psych Engine?

Many of the new FNF mods you have experienced lately on our website have run on the Psych Engine, and today you get to re-experience the original game made in this new gaming engine, which will feel like both something old and something new at the same time, as Shadow Mario has made many improvements thanks to his engine.

The story mode features the first six weeks, and so does the free play mode, but in the first one you have to win one week at a time, and in the second one you can play with just one song if you wish.

Either way, to reach the end of the songs and win you need to play all the notes of the songs at the right time in their charts, so press arrow keys at the same time as arrow symbols above BF match one another.

Know that if you miss hitting the notes too many notes in a row, you end up losing and having to start the rap battle again from scratch, which we don't wish for you, that's for sure. Enjoy!