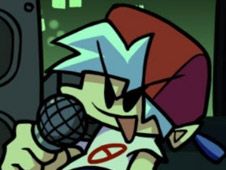 Try the updated FNF on Psych Engine 0.6.2 mod, featuring all the songs and antagonists all the way to Week 7 (Tankman), with tons of improvements that will make playing this game even better than before, so adding it right now for you was very important for us!

Whether you choose to play in the Story Mode or Free Play mode, you've got to do the same thing, which is to help Boyfriend win against the antagonists to keep his relationship with his Girlfriend going on. Reach the end of the songs by playing their notes according to the charts to win. Your antagonists are:

When you see arrow symbols match above BF's head, press the identical arrow keys to hit your notes, and keep on doing it until the song's conclusion to win. Be careful not to miss doing it too many times in a row, or you lose. This applies to both modes. We wish you good luck and all the best, inviting you to stick around for more fun games to come!