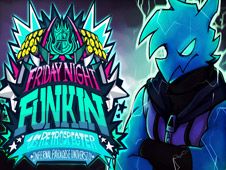 What is FNF vs RetroSpecter 1.5 (Psych Engine)?

RetroSpecter returns in FNF as both a creator and antagonist, since his avatar has been one before, but this time we have the 1.5 version with a new engine as well, where you have way more songs than in the first one:

Defeat RetroSpecter on even more amazing FNF songs and remixes!

After you've made your selection between the story mode and free play mode, as well as of the difficulty level, give your best to win by reaching the end of the songs, which you do by playing all your notes according to the charts.

This means pressing arrow keys at the same time as the identical symbols match above BF. Make sure not to miss hitting notes in a row too many times, or you lose and have to start again from scratch. Good luck, enjoy!