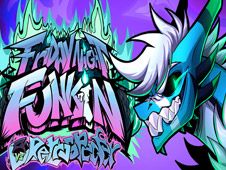 What is Friday Night Funkin’ Vs RetroSpecter?

It goes without saying, but RetroSpecter is one of the most popular remixers in the world of FNF Games, as he has created some of the sickest beats and remade some of them even better, with you now finally having the chance to go up against him himself, or, rather, against his dragon avatar, something that you will do in this full week mod with the following songs:

You pick between the story mode or free play mode, and, then, no matter what song you are playing on, give it your best to play all of its notes according to the charts, reach the end of the song, and win when the progress bar has fully tilted towards you.

This means that when the arrow symbols above BF match one another, you will have to press the same keys. Be careful not to miss the keys too many times in a row, or you will lose the whole game. Enjoy!