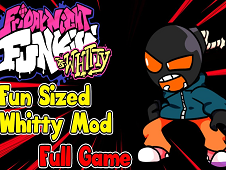 You know the Friday Night Funkin games, but this time we'll have the 2nd part of Whitty's battle.
A new model that is eagerly awaited by FNF players, in which you will meet two versions of Whitty, the big Whitty and the little Whitty, who is much more likeable and at the same time nervous because he fails to beat his brother bigger.

How can you win the dance battle?

Try to catch the rhythm of the new songs and dance as well as possible, impressing the beautiful Girlfriend with your dance moves.
In order to win the battle of dance rhythms, you will have to be on stage with the arrows going from bottom to top, and when an arrow overlaps the shape of the arrow at the top, you will have to press the corresponding arrow, so as to convey to the dancer the movement he has to make.

use the arrows to dance!