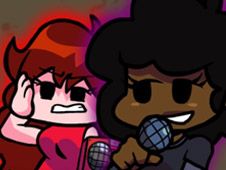 What is FNF Killer Scream Sung by Whitty & Carol?

FNF's Killer Scream song will now be sung by none other than Whitty and Carol, who usually have romantic duets, but now they are having a fight, and we're sure you will have a great time even in this scenario!

Sing Killer Scream with Whitty and Carol in FNF!

Press the arrow keys at the same time as the identical arrow symbols match above your character to the right, this being Carol so that you hit your notes until the song ends and win, but if you miss doing it many times in a row, your health bar depletes and you lose, so focus not to let that happen but become the winner instead. Good luck, enjoy!