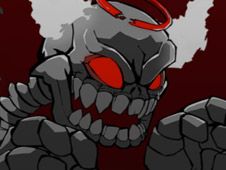 What is FNF vs Tricky Phrase 5? (FanMade)?

It seems that whenever Boyfriend thinks he has defeated Tricky in the musical battle, with Tricky being one of the funkiest clowns out there, he still has a new form up his sleeve, and we've now reached his fifth phase, where he is just as angry as previously, and he has a demon form too, but this time it is only the skeleton of it.

Can you help BF defeat Tricky once again?

If you are, then give it your best to reach the end of the songs with the progress bar in your favor and win! When you see the arrows matching above BF's head, that is the moment when you press the same arrow key on your keyboard to play, rap, or sing that note of the song's chart.

Be very careful not to allow yourself to miss playing too many notes in the songs because if that happens you also lose the game and have to start it all over again from scratch. Good luck!