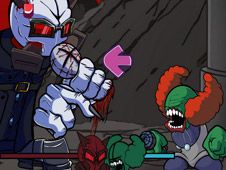 What is FNF: Torture VS Tricky?

We love it when there are mash-ups out there between popular mod characters from FNF, just like it is the case right now when our administrative team is delighted to share with you the game called FNF: Torture VS Tricky, where Mag-Agent from the Torture mod and the famous Tricky are battling it out on the song called Torture.

Can you help Tricky defeat the Mag-Agent?

Yes, instead of BF you become Tricky in this game, but the rules remain the same, so give it your best to reach the end of the custom song and have the progress bar in your favor to win.

To hit the notes of the songs you use the arrow keys, pressing them at the same time as the arrows match above Tricky, but don't do it at wrong times too many times in a row, or you lose the whole game.

Now you know how simple the gameplay is, so start the game right now, and have fun like it is possible only on our website!