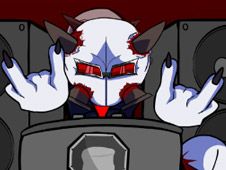 What is FNF vs Mag Agent Torture?

Mag Agent from Combat Madness is a character you might already be accustomed to since he has been featured in the FNF Games category of our website before, but now he returns with a more complete mod, as FNF vs Mag Agent Torture, the game on this page has two original custom songs, called Agency and Consternation, and it has new sprites, new animations, backgrounds, and lots more fun stuff!

Once more, defeat Mag Agent and escape his torture!

You can face off against this character in either the story mode or free play mode, with the goal being to play the songs so well according to their charts that you reach their end, and the progress bar has turned in your favor.

To achieve that, focus hard so that when arrow symbols above BF's head are matching with one another, you press the same arrow keys on the keyboard to hit the notes.

If you miss doing that multiple times in a row, you will lose, so we hope that you won't allow that to happen for anything in the world!