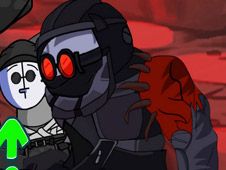 The Mag Agent from Madness Combat series is now making his return to the Friday Night Funkin' Games category once more, this time with two other songs, different from his previous ones, hence the name of the game being FNF vs MAG Agent V2.0, and we are sure that you will help BF defeat him again, this time on these two tracks:

Use music and not brute force to get rid of MAG Agent!

After making your pick between the story mode and free play mode, give it your best to reach the end of the aforementioned songs by playing all their notes according to the charts, without missing too many notes in a row, since that leads to you losing and having to start again.

To play notes, watch for when arrow symbols above BF match one another, and press the same key, but don't press too early, too late, or the wrong key, since that counts as a miss, and you know what happens if you have too many. Enjoy, good luck, and make sure to stick around for even more fun to come!