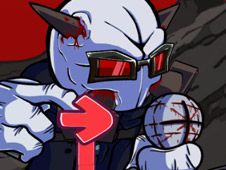 What is FNF vs Mag-Agent?

The fun provided by our series of Friday Night Funkin Games online is not stopping anytime soon, just as you can see right at this moment, when we are delighted to share with you a brand new game from the category, one that is called FNF vs Mag-Agent, which offers you precisely what you would want, which is new antagonists and new songs!

Help BF defeat Mag-Agent, a villain like no others before him!

Mag-Agent is a secret soldier whose specialty is torture, music torture in this case, and he comes from the Madness Combat series that we are sure many of you love. He looks like a huge demon with white skin, who wears a trenchcoat and red glasses, and the song featured here so far is called Torture.

To win against Mag-Agent you need to reach the end of the song and have the progress bar in your favor, which would mean that you have played all the notes of the song at the right time. To achieve that, use the arrow keys, pressing them at the same time as arrow symbols match above BF.

Be careful not to press the keys at the wrong times, since too many missed notes mean losing the game. Enjoy!