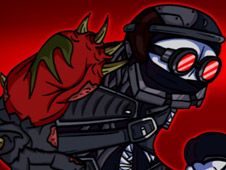 What is FNF Vs Mag Hank Rebooted?

Hank from Madness Combat is back in our beloved category of Friday Night Funkin' Games, where he had been featured many times before, but, as you can see right now, he comes back in a new form, that of Mag Hank, where he is buffer, bigger, stronger, and, even more, talented at music, so give it your all to help Boyfriend defeat him once again!

Boyfriend Vs Mag Hank, a madness of a rap battle!

Being a demo, this game only has one song, a song at the end of which you need to reach by playing all of the notes according to the charts, so when you see arrow symbols matching above Boyfriend's head, you need to press the same arrow keys and keep doing it until the end to win.

Be careful about missed notes, because if you have too many of them in a row, you lose the whole duel and have to start again from the top. Good luck, and all the best we want to wish you all!