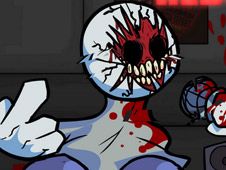 What is FNF vs ScrapFace Rebooted?

We really love horror antagonists when they appear in our category of Friday Night Funkin' Games online, just like it is the case right at this moment, when our team invites you all to have tons of fun with FNF vs ScrapFace Rebooted, where ScrapFace is a scary monster with a banged-up face, who is deranged and crazy, and the only way to save Boyfriend from him is by defeating him in a rhythm battle!

The FNF vs ScrapFace Mod custom songs are:

Only rhythm can defeat the evil of ScrapFace, so give it your best right now!

Pick between facing this antagonist in the story mode or free play mode, and then give it your best to reach the end of the songs and turn the progress bar towards you, doing so by following the chart of the song accordingly.

To do that, when arrow symbols above BF's head match with one another, you need to press the same arrow keys, but remember that if you miss doing that too many times in a row, you lose the game and have to start all over again. Enjoy!