FNF vs Tricky in HD 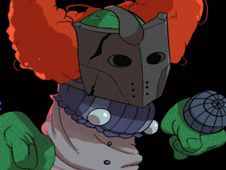 What is FNF vs Tricky in HD?

Tricky is a mad clown, and probably the FNF original character that has made the most appearances in this series, which is why we are delighted that he is back again on our website, just like his many fans probably are, and at this moment you are all invited to check out FNF vs Tricky in HD, which takes all the things you loved about the original FNF Tricky Mod and makes it better, because it is in high definition, and everything looks slick, modern, and awesome!

Defeat Tricky in a music battle, no in HD!

As you know, Tricky has two songs you can face him on, in either the story mode or free play mode, and they are:

You will use the arrow keys to hit the notes of the songs at the right time in the chart, so when arrow symbols above BF match with one another above BF, that is when you press the same arrow keys.

Be careful not to press the keys at wrong times, since too many misses in a row mean losing the game. But, if you keep getting the timing right, you reach the end of the song and the progress bar turns in your favor, you've won.

Noob: In Search of Herobrin
ADVERTISMENT