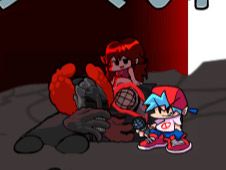 What is FNF: vs Tricky HP Crawler?

HP Crawler is the newest demonic form of Tricky the Mad Clown that you and Boyfriend will have to face off against in a musical battle on our website, as all of you right now are invited to have the most fun possible with the game called FNF: vs Tricky HP Crawler, where you duel this new creepy character on the song called Insanity.

As per usual, watch for when arrow symbols above BF's head are matching with one another, and, when they do, press the same arrow keys on the keyboard, something that you've got to keep doing until the end of the song in order to win.

Be careful not to miss pressing the keys too many times in a row, because if that happens, you lose and have to start again from scratch, something we don't wish for any of you!