FNF: Headache but Every Turn a Different Cover is Used 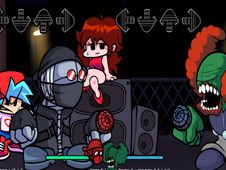 What is FNF: Hank And Tricky Sing Headache?

Hank from the Combat Madness series and FNF's Tricky have been together before in our category of Friday Night Funkin Games online, and sometimes they replaced one another in some mods, but today you will see them in a brand new light, as the two of them will duet with one another in a mod called FNF: Hank And Tricky Sing Headache!

Help Hank and Tricky nail all the notes of the Headache song!

When you see that the arrow symbols above your character are overlapping with those that float towards them, use the arrow keys to press the very same arrows and hit the notes of the songs, having to hit them all the way to the end of the song to win, when you see the progress bar coming towards you.

Be careful not to press the keys too early or too late, since that is considered a miss, and if you make too many misses in a row, you lose the game and have to start again from scratch, and you would not want that, right? Good luck, and enjoy!