FNF vs Minus Sonic.EXE 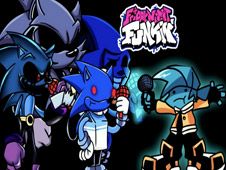 What is FNF: Minus Sonic.EXE Remastered?

The FNF Minus Sonic.Exe has been one of the most popular FNF spin-offs featuring Sonic, so we are no confidently excited to bring along for you all the remastered version of that mod, where the designs of all the characters have been remastered and updated, so it all looks better, sounds better, and will definitely be more fun than the original!

Defeat Minus Sonic.Exe just like you've done with the original!

After choosing how you want to play this game, in either the story mode or free play mode, your goal remains the same, and it is to play the notes of the given songs until the songs conclude, since that is when you win!

To do that, when arrow symbols above BF match one another, you will press the same keys, but if you miss doing it multiple times in a row, that will lead to you losing the game and having to start it again.

Start all the fun offered by this game right now, and don't hesitate to check the category further, and keep having a good time!