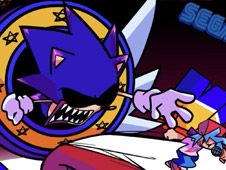 What is FNF Sonic.EXE Final Escape?

FNF Sonic.EXE Final Escape is one of the most difficult mods to have featured this character here so far, which is precisely why we hope none of you miss out on it for anything in the world, since trying out these difficult mechanics will only make the game more fun!

Stop the Final Escape of Sonic.EXE in FNF!

Most of the time you have to do the same things as always: press arrow keys to hit your notes, the same arrows as the symbols matching above BF's head, precisely when they do. Keep hitting notes like that until the song ends to win, without missing too many in a row because you will lose.

When you see the dodge warning appear, press the spacebar, avoid the goal notes, since they bring you back in time, and missing notes deplete the rings, so don't lose all fifteen rings, because you also lose the game. Good luck, have fun!