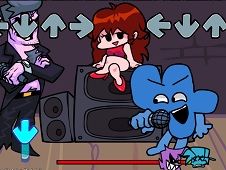 What is Friday Night Funkin' Four vs Boyfriend?

Four vs Boyfriend from the Friday Night Funkin' series is the newest published mode, and this time you will meet a strange character, different from all the others you have known so far, namely Four.

Four is a cartoon number, blue, in the shape of the number 4, which has black eyes and looks like a being. This Disney character was first published in 2008 in the series Battle for BFB which is a comedy/drama for children. In the cartoons in which he appeared, he was always sadistic and cynical, characterizing his friends as he pleased and trying to laugh at them.

In this game that we proposed for you today, you will have to fight against this character on rap rhythms, with a microphone in your hand and all the lights on you. To win all the rap battles you will have to move fast and take advantage of all the energy you have, because Four dances very fast, and in a short time he will win.

The Mode was developed by Bookeymations
Read more about Four

Use the arrows to dance as fast as you can.