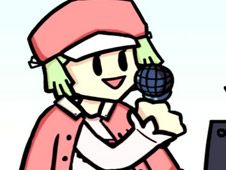 Welcome, all to the latest FNF mod online to be offered for free by our administrative team for you all here right now, a game called Friday Night Funkin Boyfriend’s Circulation which brings a totally whole new spin on this game and brings not only fresh characters such as Kana but also new songs as well, so there will be plenty of things for you to love about it here!

The story of the Friday Night Funkin Boyfriend’s Circulation mod:

Boyfriend dozed off while watching a video on YouTube called Renai's Circulation, which is a cool song by Kana, a virtual anime song pop star who wears light-blue trousers, a pink shirt, a pink jacket, and a pink hat on her head, with her having cute blond hair. Now, BF finds himself in a singing battle against Kana, precisely on this song, and you have to help him win at any cost if he were to escape the dream world!

How to play FNF Games such as this one:

Your timing is the most important factor that will be needed to win the rhythm battle, so you need to be focused at all times! When the arrow symbols floating above BF's head are matching one another, press the same arrow key on your keyboard at the same time, and hit the note! Win by taking the song to the end, but don't have too many misses in a row, or you lose, and BF will be trapped in the dream world forever!