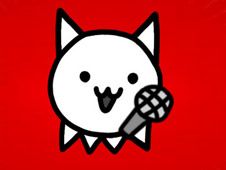 What is FNF vs Battle Cat?

It's a new day, which means it's a new time for you all to have lots of fun for free on our website with awesome new Friday Night Funkin' Games online, just like you will be doing right at this moment when the game you are playing is called FNF vs Battle Cat. Just like its name suggests, Battle Cat does battle, but it is too cute to fight with fists, so it does it with music, which is why you will help Boyfriend defeat it on the following songs:

Help Boyfriend defeat Battle Cat while improving your own rhythm!

When you see the arrow symbols above Boyfriend match with one another, that is when you have to press the very same arrow keys on your keyboard to play the notes of the songs according to the charts, and if you reach the end of the songs with the progress bar being in your favor, you've won.

Pick between the story mode and free play mode, and then start giving this game your best, having fun like only here is possible!