FNF vs Michael The Walking Cat 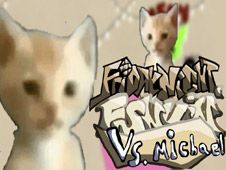 What is FNF vs Michael The Walking Cat?

Michael is a cute white cat that can walk, but, did you know it can also sing? Well, it is quite the fearsome musician, which is why it has now challenged Boyfriend to a rap battle, one that we hope you will help our protagonist win, as you usually do, and you will do it on the following songs:

Show us you've got a better rhythm than a cat!

Whether you choose the story mode or free play mode, it does not matter, since you've got the same goal, either way, to reach the end of the songs by playing all their notes according to the charts.

To do it, when the arrow symbols above BF match one another, you will press the same arrow keys, and you will keep doing it until the song ends to become the winner.

In case you miss to press those keys multiple times in a row, you lose and have to start again from scratch, so focus hard not to let it happen for anything in the world. Good luck, enjoy, and stick around for more fun to come!