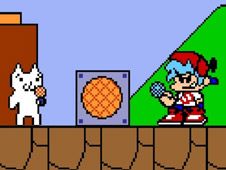 What is FNF vs Cat Mario – Rage Mix?

Cat Mario is now also an opponent of Boyfriend's in FNF, because why not, and we hope that right now and here you're going to have a totally amazing fun time going up against this classic video game character with a twist, defeating it on the following custom tracks:

In either mode, win by reaching the end of the songs, something that is only possible by hitting your notes according to the charts until then. So, when the arrow symbols match above BF's head, you press the identical arrow keys. Don't miss the keys multiple times in a row, or you lose and have to start all over again from scratch. Good luck, the best we wish you all!