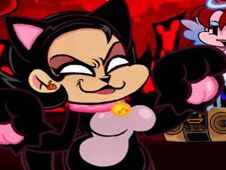 What is FNF: Sunday Night Spookin vs Cat Nene?

Nene is a girl who is really good at music, and who dressed up as a cat for Halloween, which is when Boyfriend met her, so the two immediately hit it off, and then they started going up against one another in rhythm battles, something we invite you to do as well right now with this awesome mod, which has the following custom tracks:

Boyfriend Vs Cat Nene, a Halloween rhythm battle for the ages!

As per usual, you will choose between the story mode and free play mode, after which you've got the same goal for both, which is playing all the notes of the songs at the right time, reaching their conclusion in order to win.

To hit notes, watch for when arrow symbols above BF match one another, and press the same keys from your keyboard, but know that missing to press the keys one too many times will mean you lose.

Good luck, enjoy, and don't leave, since you don't know when brand new awesome games are coming right around the corner on our website!