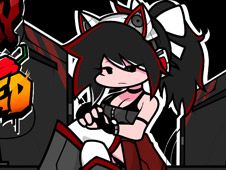 Salty’s Sunday Night: Ghost Peppered is yet another version of the old-school FNF mod that took the premise of the original and transported it into a new universe with new characters, as Salty is the one taking place of Boyfriend, becomes the main character who does musical battles on Sunday nights instead of Fridays, and it happens on a new range of tracks, with this one having even more new ones:

Whether you're playing in the story mode or free play mode, win by reaching the end of the songs, which you do by playing their notes according to the charts until the song ends, because if you miss hitting notes and your health bar depletes, you don't reach that point and lose.

So, when the floating arrow symbols match above Salty (on the right side, usually), press the identical arrow keys at the same time. You miss notes by not pressing the keys, pressing the wrong ones, or pressing them too late or too early, so focus on not letting that happen. Good luck, enjoy!