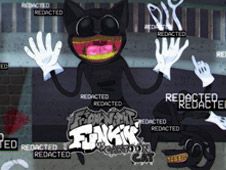 What is FNF vs Cartoon Cat?

Cartoon Cat is quite a scary creation of the internet, which is why we believe that this character works great for this time of the year to appear again in the FNF Games category, where once again you have to battle it, this time on different songs from the previous one, which is called:

Out-sing and out-rap battle the Cartoon Cat to win!

Whether you choose to face the character in the story mode or free play mode, the way to play remains the same, and it is by reaching the end of the songs, which is when you win, but it only happens if you play all notes from the charts at the right time.

This means that when arrow symbols above BF match one another, you will press the identical arrow keys, but if you miss doing it too many times, you lose the whole game. Enjoy!