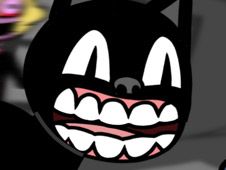 What is FNF vs Outrun Cartoon Cat?

Welcome once more to the best website on the internet for all things Friday Night Funkin, where right at this moment we are delighted to share with you a game such as FNF vs Outrun Cartoon Cat, featuring a brand new character, awesome new songs, and lots of fun for you to have from start to finish, so missing out on this should be out of the question!

Cartoon Cat is a creepy humanoid cat who started off as an artwork on the internet, and it got so popular that there was music made for it, videos, memes, and now it is a featured antagonist in an FNF game online! The cat resembles cartoons from the '30s, is all in black, and has white gloves on it, and its smile is quite creepy.

It also has the ability to shapeshift, making it quite dangerous. Songs featured in this game include:

Reach the end of these songs and turn the progress bar fully green in order to win. Press arrows when they match above BF's head and make sure you don't miss too many notes in a row because that happening means you lose the game and have to start from scratch. Outrun and out-sing this cat right now! Good luck with that!