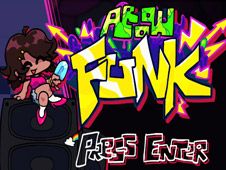 What is FNF: Arrow Funk?

We love to see re-designs and remakes of the original Friday Night Funkin' game, just like we get to offer you all right now and here when you are invited to have tons of fun with FNF: Arrow Funk, where the characters look different, and the two weeks that this game includes so far also are fresh, having been re-works or remixes of the original ones. They are:

From the game's main menu you will choose between the story mode and free play mode, but no matter which of the two you've picked, the goal you have is the same, which is reaching the end of the songs by playing all their notes according to the charts.

To do this, you have to press the arrow keys at the same time as arrow symbols above BF's head are matching with one another, but be careful not to miss pressing them multiple times in a row, since that leads to you losing the game and having to start it again.

Good luck to you all, we wish you all the best, and hope that you stick around for more fun to be had!