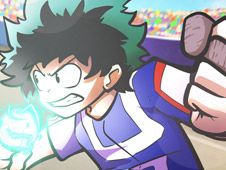 What is Funk’s Justice Vs. Deku (My Hero Academia)?

Deku, the protagonist of My Hero Academia, without a doubt one of the most popular anime series in the last decade, is now also the antagonist for a rhythm battle, not one with supernatural powers since that is the battlefield of Boyfriend, who you will help defeat this new character just like in the tournament depicted in the show's second season. 'Full Cowl' is the name of the song, just like one of his abilities.

Try the new Funk’s Justice mod and defeat Deku of My Hero Academia!

When you see floating arrow symbols matching above BF's head, press the identical arrow keys to hit your notes, and if you can keep at it until the song ends, you win, but know that missing to hit your notes too many times in a row leads to you losing the game, so don't let that happen. Good luck, enjoy!