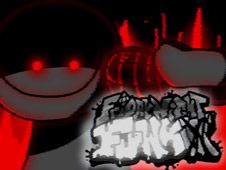 What is FNF vs Funk?

Funk is the newest modded character that Boyfriend has to battle against and he is quite the creepy stickman-like creature, one who you have to defeat on two custom songs so far, with more of them to be added in the future:

You will use the arrow keys to hit the notes of the songs at the right time, meaning that you have to press them at the same time as arrow symbols match above BF, and if you do that until the end of the songs, the progress bar turns in your favor and you've become a winner, simple as that!

Of course, this also means that you need to be careful not to make too many misses in a row since that means losing the game. Misses means pressing wrong keys, or pressing the correct ones but at wrong times. Good luck, enjoy, and we hope to see as much more of you here as possible in the near and long-term future!