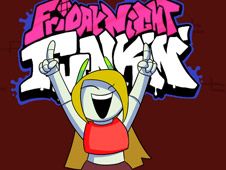 What is Friday Night Funkin Funk The Guy?

The world of FNF Games online is one full of surprises, and new and interesting content is coming to it as often and as fast as possible, which is the reason why right at this moment you are all invited to check out Friday Night Funkin Funk The Guy, which is a spin on the popular platformer game I Wanna Kill the Guy, featuring those characters in a rhythm battle, something we are sure you will enjoy a lot!

What is I Wanna Kill The Guy?

This is a classic platformer game with lots of levels and fun action, being one of the first fangames in the world to have reached a really huge popularity, and The Guy, the main character of the series, is now going to be featured in this rhythm battle. He sort of looks like Superman, having a blue shirt and a red cape on his back, and he also holds a gun in his hand. Kill-The-Guy is the custom song featured in this game, and it is a rework of the game's original soundtrack.

Despite Boyfriend not being the main character you inhabit, the way to win the rhythm game remains the same, so we hope you've got all the focus and concentration in the world you need!

When you see arrows floating on the screen above your character and matching the ones on top, press the same arrow on your keyboard in order to hit the notes of the song properly, and if you reach the end, you win, but having too many misses in a row will cause you to lose the whole game.

We wish you all good luck, and we hope to see you playing even more of these new FNF Games we've got for you all the time!