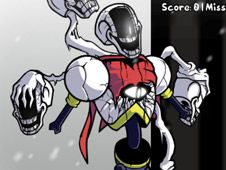 A new Undertale Mix called Frostbite has appeared, and it is of FNF Hypotermia, which we are sure that you are going to love, even more so with the added mechanics of this game, which are that you need to avoid the bone notes when Sans appears, and not letting the cold bar reach max, being able to decrease it by pressing space, but only for a limited number of 11 times.

Reach the song's end to win by playing its notes according to the charts, doing it by pressing arrow keys at the same time as the identical arrow symbols match on the top right, but know that missing your notes multiple times in a row and letting the health bar to decrease and empty out leads to your loss too. Good luck, and stick around, more's to come!