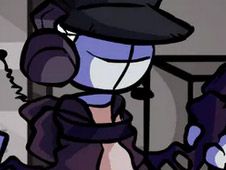 What is FNF Vs Deimos Aggregation?

Deimos from Madness Combat is a popular character of both that series and our series of FNF Games online, so we are very excited that this character has now returned for you to battle against in music, something that you will now do on three awesome songs you have not face off against him before:

Take out Deimos with Music, not Combat!

For this rhythm game you can play in either the story mode or free play mode, it's all your choice, with your main goal being to reach the end of the songs by playing all their notes according to the charts.

This is done by pressing arrow keys at the same time as arrow symbols above BF's head match one another, but if you miss doing it too many times in a row, you will lose the whole game then and there.

Good luck we wish you all, and hope that you stick around for more fun to come, as only on our website is possible to have it. Enjoy!