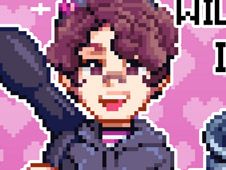 What is Wilbur Soot Over Week 6?

Wilbur Soot is a popular YouTuber who is also a musician, so it makes sense that his fans would mod him into the Friday Night Funkin Games series, where he now has his own mod where you help Boyfriend defeat him, something that you do during Week 6, because he is replacing the character of Senpai, so Wilbur has now been transformed into an anime character, which we're sure he loves.

How to play and win FNF Games, explained!

Your goal is winning the musical battles of rhythm, something that you do once you've reached the end of the songs and the progress bar is more towards your favor.

To do so, play the notes of the songs at the right time, which means that when arrow symbols above BF match with one another, you need to press the very same key on your keyboard, at the exact same moment.

Hitting wrong keys or pressing them at the wrong times count as misses, and if you make too many misses in a row, one after another, you lose, so don't allow that to happen!

Start the fun right now, and we hope to see you around some more, playing the best games on our website, as always!